Hunger in Brazil, waste and the circular economy

Between 2020 and 2022, the total number of Brazilians going hungry rose from 9% to 15.5% of the population. There are another 14 million people who have entered into serious food insecurity and a serious problem that concerns the entire population, mainly because 17% of the food available to consumers ends up in the garbage and about 14% of the food produced is lost between harvest and retail every year in the world, according to UN data. To analyze the relationship between waste and hunger in Brazil, as well as the importance of the circular economy for better use of food, we invited Professor Dr. Edson Grandisoli, Pedagogical Coordinator and Educational Ambassador of the Circular Movement, who wrote the following article. Check out:

The map of hunger and circularity

What are we going to eat today?

According to the 2nd National Survey on Food Insecurity in the Context of the Covid-19 Pandemic in Brazil, developed by the Penssan Network (Brazilian Research Network on Sovereignty and Food and Nutritional Security), 33.1 million people are unable to answer this question. The number of starving people in Brazil is almost twice as high as in 2020. The survey also shows that only 4 out of 10 families have full access to food and that more than half (58.7%) of the Brazilian population live with food insecurity to some degree.

The causes of this widespread picture of food insecurity are related to the dismantling of public policies, the economic crisis, the pandemic and the growing social inequality, according to Penssan. In spite of being one of the largest rural producers in the world, Brazil is more and more distant from solving the question of the availability of quality food for all. 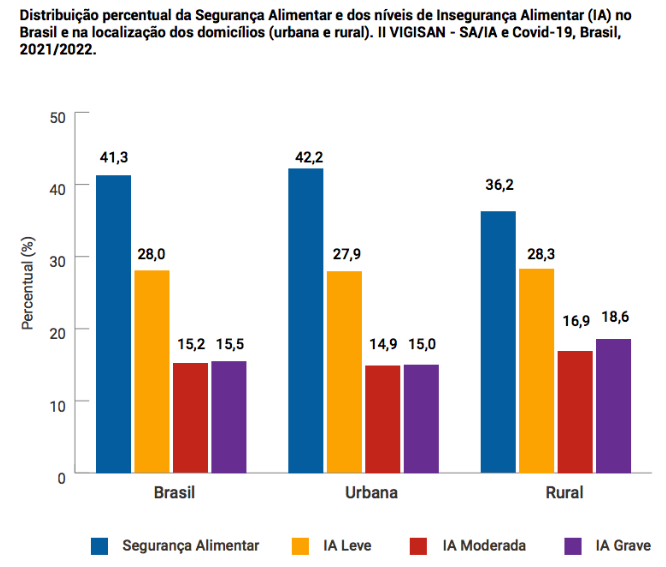 Source: 2nd National Survey on Food Insecurity in the Context of the Covid-19 Pandemic in Brazil

In addition to the causes mentioned by Penssan, there are other factors that deserve attention when we analyze the chain of production, distribution, consumption and disposal of food in further details.

The UN estimated, for the year 2021, that 17% of food available to consumers in markets, homes and restaurants will end up in waste, and that 60% of this organic waste is generated at home. Food waste at the consumer level is indeed a global problem, significant in almost all countries. In addition, about 14% of food produced is lost between harvest and retail each year. It is impossible not to be outraged about the contradiction between production, loss, waste and hunger.

Thinking of food production from the perspective of the Circular Economy, many points can be rethought in order to ensure that food reaches all people.

Reducing losses in harvesting and transportation is one of the main measures to be adopted, that is, creating mechanisms to optimize production and reduce the distance between where it is produced and who consumes it can significantly reduce losses, as well as reducing greenhouse gas emissions, since the major part of transport is carried out by trucks driven by oil derivatives.

In the markets, in general, consumers are looking for aesthetically attractive foods, that is, without stains, marks, kneads or perforations. This behavior encourages the retailer to discard "ugly" foods, but which have the same nutritional value as the others. One strategy for reducing this waste is to sell these cheaper foods, for example, or to donate them to those who need. Please note that the consumer has a decisive role in stimulating this practice.

At home, the integral use of food is possible and fundamental. About 50% by weight of household waste is made up of organic waste. In addition, composting what really needs to be disposed of reduces daily litter volume and greenhouse gas emissions. Losses and waste are responsible for up to 10% of the emissions of these gases.

Enabling donations of surpluses from restaurants and markets is also a great way to ensure food and health for all.

Food is the basis of life and the circularity of the economy contributes to the food security of the populations.

Imagine if you didn't have anything to eat for your next meal.