Migrating our planet from the linear economy model to the circular economy is an urgent need. Therefore, an annual report was created in 2018 that monitors and offers data on the circular status of the Earth. From this year's report, Professor Dr. Edson Grandisoli, Pedagogical Coordinator of Circular Movement, wrote an article about the data released and the solutions suggested for the planet to become more circular. Check it out:

Circle Academy, an international organization looking for solutions to put the circular economy into action, has just released the fifth edition of "The Circularity Gap Report" which presents, among other points, the circularity of the planet, societies and businesses.

Between the Paris Agreement (2015) and the COP 26 in Glasgow (2021), it is estimated that 11.5 Gt (Gigatons) of raw materials extracted from the planet have been used. This number represents what experts call the material footprint of the human being, which has been growing rapidly in recent centuries. In other words, we have used the Earth's natural heritage without worrying too much about the present and future consequences. 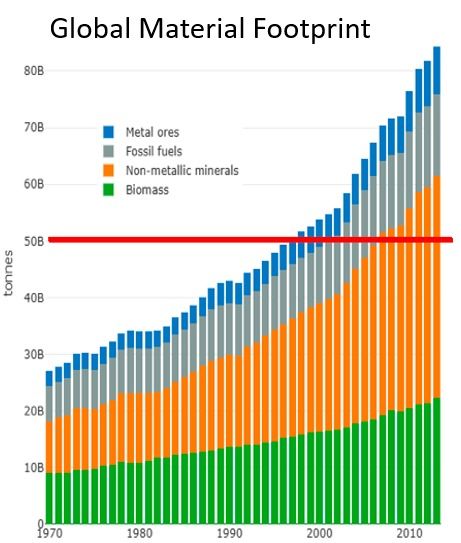 One of the ways to reduce this pressure on the planet's natural heritage is to make our economy more and more circular, stimulating the creation of processes and public policies that encourage reuse and recycling, extending the lifespan of materials that are already in circulation.

Despite this possibility, the report points out that our economy has become increasingly linear, increasing resource exploitation and generating more and more waste. In just 2 years (2018 to 2020), global circularity has dropped from 9.1% to 8.6%.

In addition, to feed this entire linear process, the use of fossil fuels has collaborated with climate change and the increase in the frequency and intensity of extreme events such as droughts, fires and floods, which have already affected, in particular, the most vulnerable populations.

Finally, the increase in the material footprint is directly reflected in the increase in world GDP. And despite this, we have never lived on a planet so permeated by social, economic and environmental inequalities. The scenario is, to say the least, challenging and, as the report states, "It is time to act collectively and 'reset' our economy and start eradicating social inequalities. In some places, this is already happening. It is time for the Circular Economy ".

Paths for implementing the Circular Economy

Although the news is not positive about the state of our planet and societies in general, it is important to understand that there are already viable solutions being implemented around the world.

Overall, the report points out 3 important points for the next 5 years with regard to the Circular Economy:

1- Making digital data tools available to everyone: the systematic gathering of local and global data directly collaborates with innovation towards a more circular economy.

2- Create metrics and indicators to understand the transition: If we do not measure, there will be no way to certify progress in a meaningful way, preventing the identification of processes and strategies that really impact circularity.

3- Use a social lens to ensure a safe and fair transition: a more holistic circular economy that really considers the social aspects in all its activities contributes to the achievement of several Sustainable Development Goals (SDGs) such as eliminating poverty, hunger; improving the health and well-being of populations; and seeking an economy based on non-carbon sources of energy, for example.

The report highlighted the importance of learning about Circular Economy and applying it in the daily life of your home and business.

If you are interested in learning more about this topic, visit Circular Academy, the first free Latin American course on circular economy aimed at general audiences.

All of us, in partnership and collaboration, can make a difference in building a more circular planet.

What is the Circular Economy?

The Circular Economy proposes a new look at our way of producing, consuming and discarding, in order to optimize the planet's resources and generate less and less waste. In other words, an alternative model to the Linear Economy - extract, produce, use and discard - which has increasingly proven to be unsustainable throughout history. In the Circular Economy, the goal is to keep materials in circulation for longer periods through reuse, until nothing becomes waste! For this model to become a reality, we all have a role to play. It is a true collaborative circle, which feeds itself, and helps to regenerate the planet and our relationships.

Created in 2020, amid the crisis caused by the Covid-19 pandemic, Circular Movement is a collaborative ecosystem that strives to encourage the transition from linear to circular economy. The idea that every resource can be reused and transformed is the motto of circular economy, the movement’s basic concept. Circular Movement is an open initiative that promotes collaborative spaces with a mission to reach more people and places. The movement’s purpose is to inform people and institutions that a future without waste is possible through education and culture, the adoption of new behaviors and the development of new processes, products and attitudes.

We participated in the panel "The Environmental Challenges of the city of São Paulo", promoted by ADE SAMPA, with Professor Dr. Edson Grandisoli, Pedagogical Coordinator of the Movement